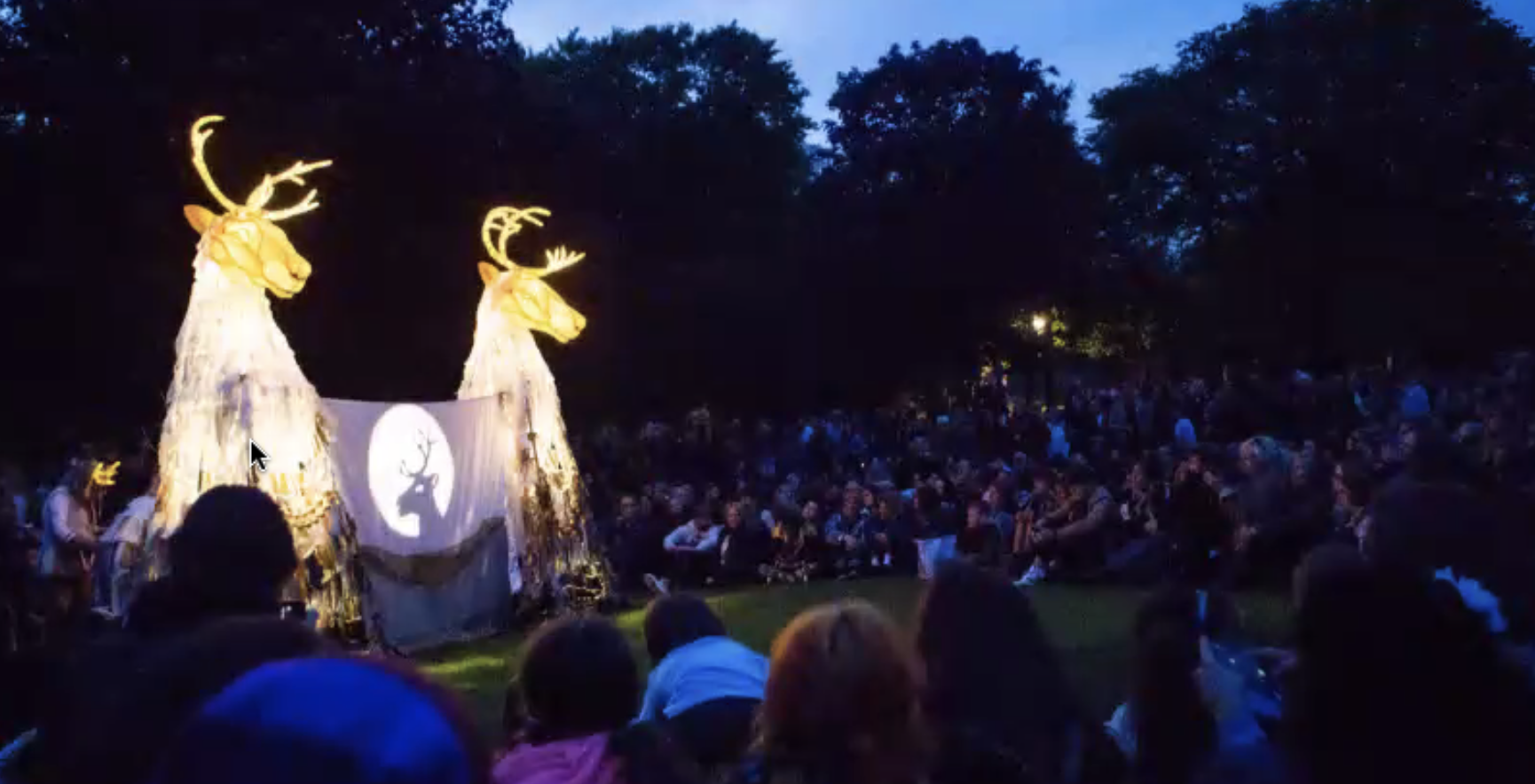 Posted at 16:42h in blog, Uncategorized by admin
0 Likes

This week, Andrew Kim joined us to talk about puppetry outdoors, and particularly about the puppets and performances he develops with his company Thingumajig Theatre.

He started by describing his route into this type of work. He first connected with a more visual style of theatre-making during his time in the United States working with Minneapolitan company “In The Heart of the Beast”. He spoke to us about the how the work produced was often political, incredibly visual (working with mask as well as puppets) and with a strong community-focus. After ten years, he left Minnesota to travel and find new inspiration for making work of his own. Time in Asia led him to further develop his raison d’être for theatre-making; the way in which art isn’t separated from the everyday experience and its connection with religion and ceremonies led him to believe that intention into a piece can give something greater power. This concept continues to influence his work today.

In 2002, after meeting his partner Kath on a project with puppet and mask company Horse+Bamboo, Kath and Andrew set up Thingumajig Theatre in Hebden Bridge. Thingumajig make small-scale touring work, and also giant puppets that are usually performed outdoors. This choice was both economic (the expiration of outdoor shows is less immediate than that of indoor shows, and re-rehearsal is less costly and more time-efficient) and political (thousands of people are able to access the performance without having to pay for a ticket, opening up the work to a more diverse audience).

Andrew then took questions from students around his experience of making large-scale puppets for outdoor performance. 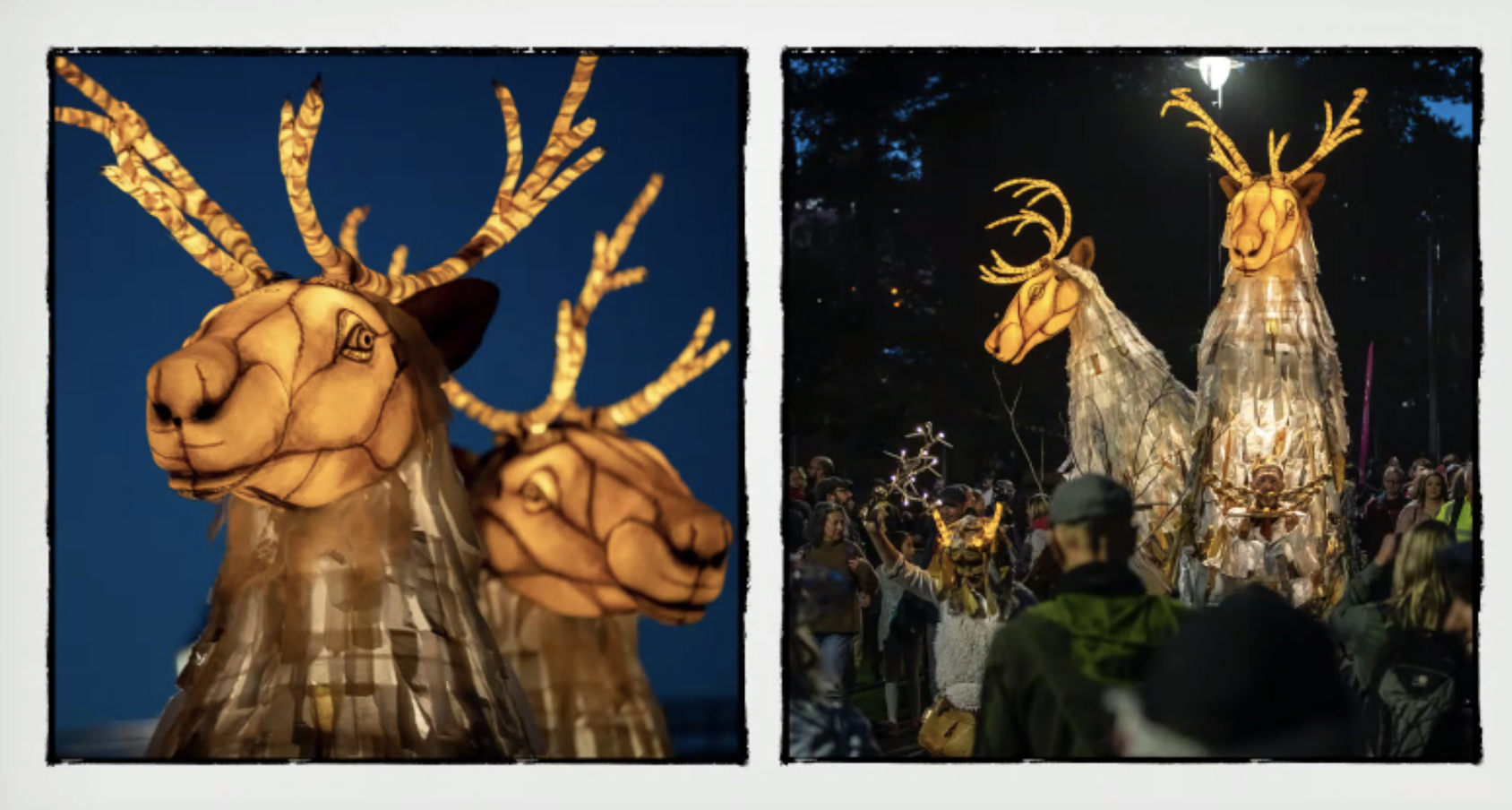 Generously, he shared some of their experience around establishing boundaries between the audience and the encounter; rather than asking for a steward to be provided by the booker or promoter, they tend to provide a companion character for each of their projects themselves. For example, giant chicken puppets are accompanied by a farmer character who can playfully escort the puppets through a crowd, and marshal audience members if necessary.

He also suggested that the problems that can sometimes be encountered in street performance can be avoided as long as the audience know immediately what the game is. How you sign-post this should be considered from the very initial puppet-design, rather than bolted on at the end. If the game is evident, the audience will then self-select themselves to participate, so you will rarely experience any obstructive or negative reactions.

In the second part of his session, Andrew shared some of his making tips, whilst talking us through the making process of several of his large-scale puppets.

A giant puppet created on Ærø Island (Denmark) with a community group, as part of the Æro International Mask Festival

He then talked a little about the Handmade Parade, a community organisation in Hebden Bridge that he set up and ran for over ten years before stepping down three years ago. More about this project can be read here.

To finish, Andrew spoke about his plans to develop a puppetry training and development programme for People of Colour in the UK, which he is currently working on with Curious alumnus Jum Faruq. If you are interested in this initiative, you may be interested in Jum’s Facebook group (click here)

Our Tuesday sessions are enabled thanks to the generous support of Arts Council England.