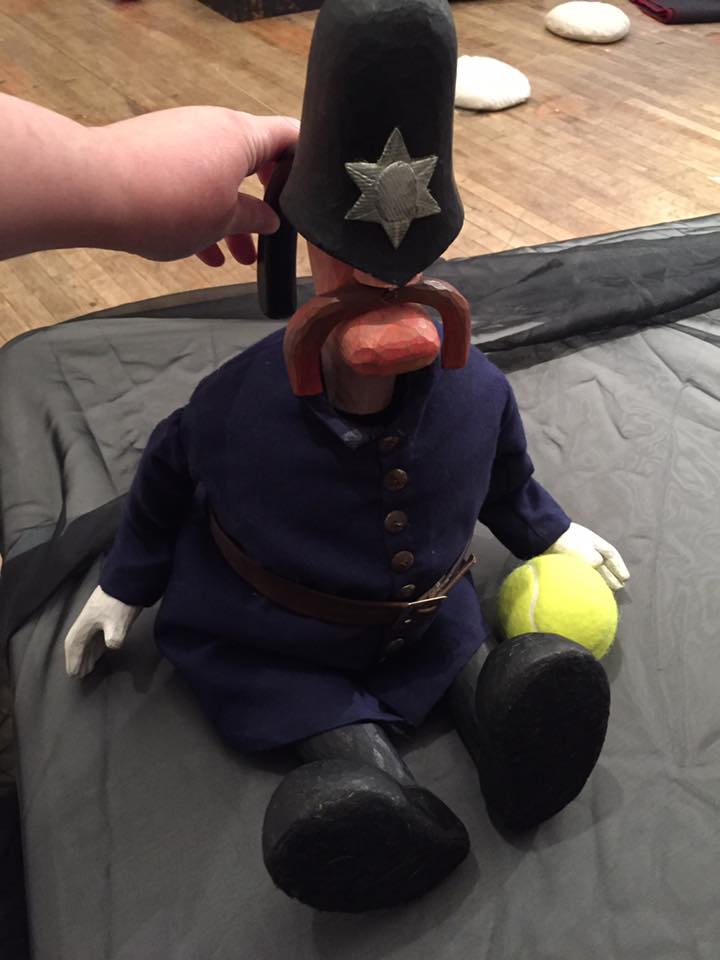 Day 19: Juggling Worms.
Today was a day of Endings and Beginnings; we spent our last day with Simon for Alexander Technique; where we discussed how to stop bad habits creeping in when learning a new skill. We have to “stop end gaining” and enjoy the process of learning; allow ourselves to take the time to really focus on the process and method of the skill instead of thinking the end product; challenge what is success and what is failure. In the afternoon we began our Marionette Training with a taster from Stan Middleton from the Puppet Barge. We were given “Worms” on strings, we were shown how fly the worms and gradually get them to the ground to crawl, a slight manipulation of a couple of strings as they move and they really look like they are crawling, we found their eye line, and let the worms interact, once we were settled in we were shown how to make them run, then given some time to play with our classmates to create a “Worm Circus”, once our confidence in manipulating these wee worms got better there were balancing acts and all sorts of contortions, and really strong little worms characters. Having never used Marionettes before; other than messing around with some as a child, I was quite chuffed at how comfortable I felt with using them. I’m used to working in closer proximity to the puppet so the distance for me was really interesting, I just have to remember some of my Alexander Technique and make sure my shoulders don’t end up in my ears while I’m concentrating and trying to get it right.

Day 20: Narrative; “Understand the straight line before you make it wavy”.
We begin three days with Mike Shepherd (Kneehigh), he is electric and you can feel him sparking fires within the group. We spend a lot of the day getting really familiar with each other, lots of eye contact; moving as one. He makes us charge the space with energy, he bombards us with hundreds of inspirational lines; most of them I don’t catch because to stop and write them down would open a hole that would suck the energy out. Those that I scribble down at the end of the day are these; Be instinctive, Do the work because you HAVE to do it, Experiment, TAKE RISKS, Defy people, Be frisky! Enjoy Failure. He gives us a news story; we are put to task to create a story board of the seven main story points within the article. We then break down the article to important words with in the text, and group them into themes, and then we break it down further until we have a core theme (what the story is about) and Three sub themes which all encompasses the most important pieces of the story. To begin the afternoon we create a trade war with sticks; sticks that we had played with in the morning “sticks that are cleverer than we are”. We create sculptures from our Day bags, and look for meaning/character/story. It is a very full day. 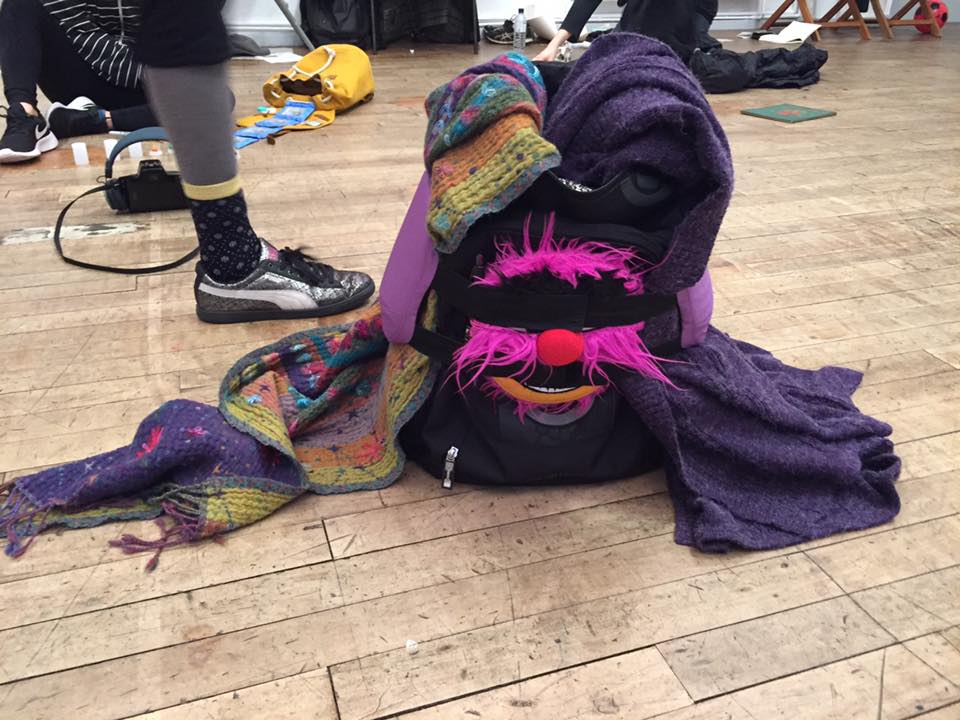 Day 21: What are you into, what floats your boat? Gets you frisky?

This afternoon we were asked to draw in response to a note that Mike had given us before his three day workshop began. He puts on music and we respond to the questions. After this day and a half with him, I’m feeling brave. 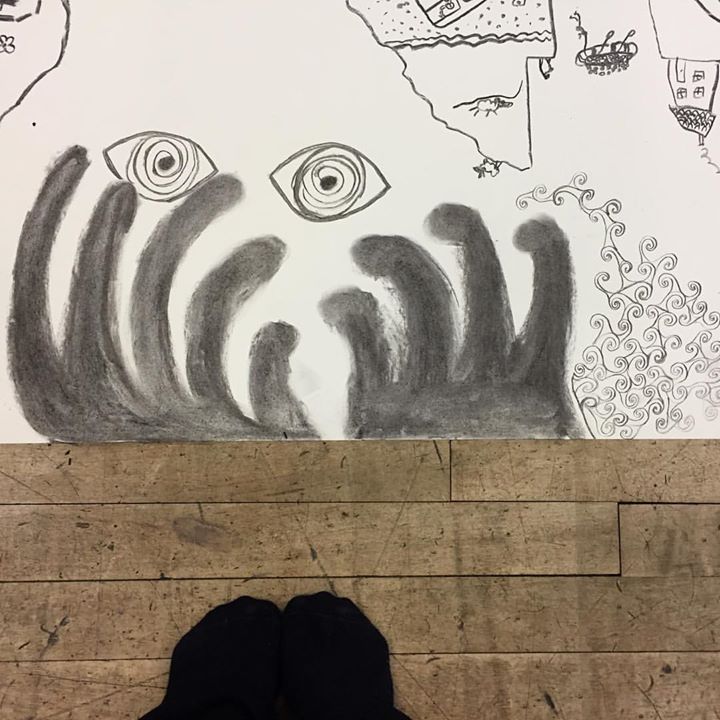 We go through everyone’s images, there are a lot of great stories and poems and memories that people want to explore. Mine is not a story, not a memory, not a poem; mine is a feeling. It’s not usually something I flag up because well; being the creepy one isn’t exactly the name you want. But I say it, mine is a feeling, that uncomfortable feeling, that look that lasts too long, the invasion of space, being too close. The sensation of control; when you look the audience in the eye and you know you are going to share with them something that will make them feel uncomfortable, but really they will love it. I talk about Anatomy museums I’ve visited; The Surgeons’ Hall in Edinburgh with its cabinet of eyes and the song that follows me around, that haunted my dreams for weeks and would hear playing everywhere I went “Psycho Killer”.

Having had the evening to mull over our ideas from what gets you frisky, and the suggestions from Mike and the group about what the stories for these images could be; we are asked to draw scenes we think could be part of our story. I think of the reverence and respect given to objects from the human body in the anatomy museums, I think of autopsy and that song that follows me everywhere. When we discuss our thoughts I discuss a character obsessed with his specimens, an obsessive autopsy. 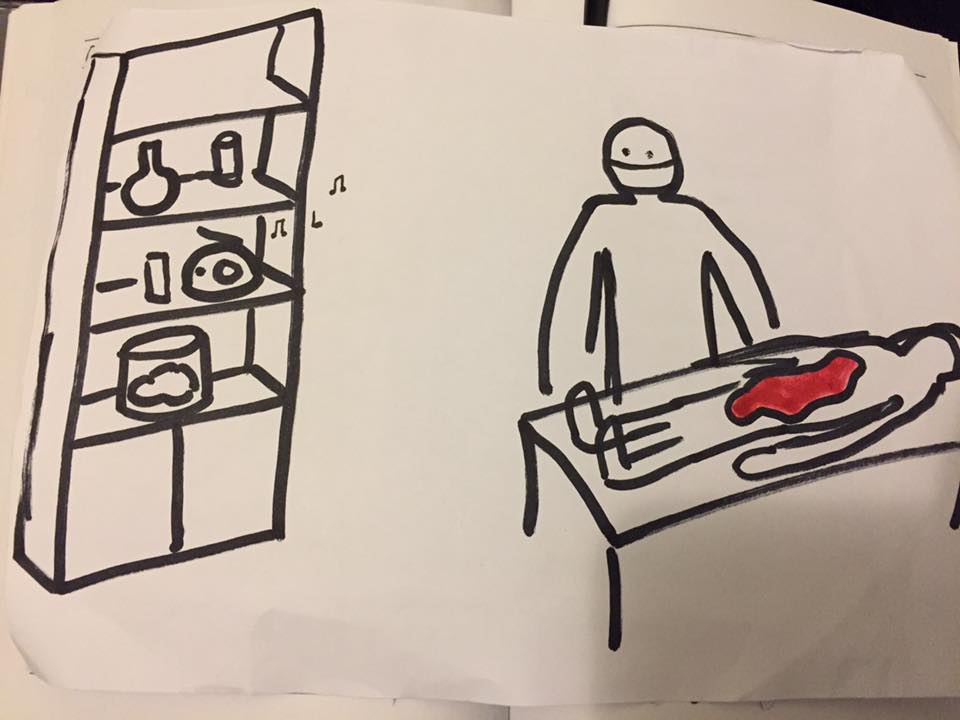 From everyone in the groups’ individual stories and ideas of character a few are selected to be played with, we form groups and are given one that does not belong to us. Our group were asked to create a scene from the image of “Politicians and a Girl with Cyanide”; we are asked to think about Trump signing the papers affecting women’s rights. We searched for politicians finally deciding to use Teddy bears; we choose a sweet girl puppet as the girl. And create a teddy bears picnic, with Waring political bears and an assault on the girl by the bears. We present our rough ideas, and then Mike directs us a little, he asks Sarah Wright to direct the puppetry for particular moments, highlighting the importance of the directors. Mike has given us permission to really push our ideas and take on challenging material and be risky.
Day 23: Three Little Pigs
Using the way Mike has shown us to break down stories, Sarah Wright spends the afternoon with us taking a traditional story and breaking it down; we use the three little pigs (a very early version). In groups we break the story down to five plot points; we share these with the group. Then choosing one plot point from one of the four groups we create a scene. The group I’m in focuses on the wolf and pig playing tricks on each other, we use a bear puppet as our wolf and a policeman as our pig. the wolf had a series of costumes he dressed up in to try and trick the pig. We are encouraged also to really focus on using impulses with the puppets as it’s something we are all keen to explore more. Each group does a different stage in the story and we present what we have, each scene is rich and diverse but all hold on to the key themes we agreed on to begin with, Successful and exciting day. 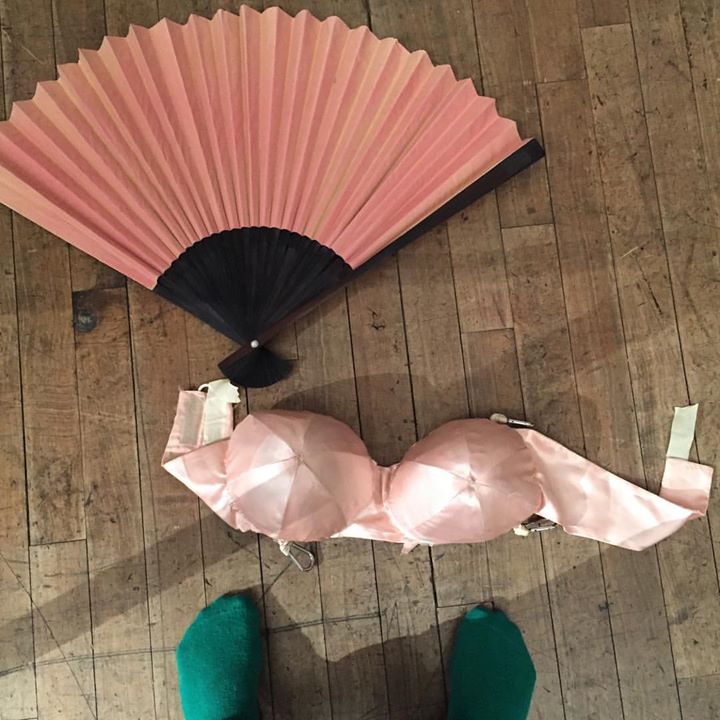 We spend the day in the Little Angel Theatre workshop with Lyndie and Tim, the aim of the day is to learn wood carving, carving a nose and hands for a puppet we are going to be building later. This was a very satisfying day, we sketched out noses and created transfers of a side and top view to copy onto blocks which were then ban sawed to give us a rough shape to then carve into. It was important to work quickly and having done the foam carving for our previous puppet was very useful, as meant that I was a lot braver at just lobbing chunks out of the wood. We moved onto hands which were trickier; the more space between the fingers the harder it is to ensure all the digits are still intact. My hands and nose all need a bit more sanding and maybe a once over with a chisel just to round some bits off but I’m fair pleased with what I made. That’s chisels on the wish list! 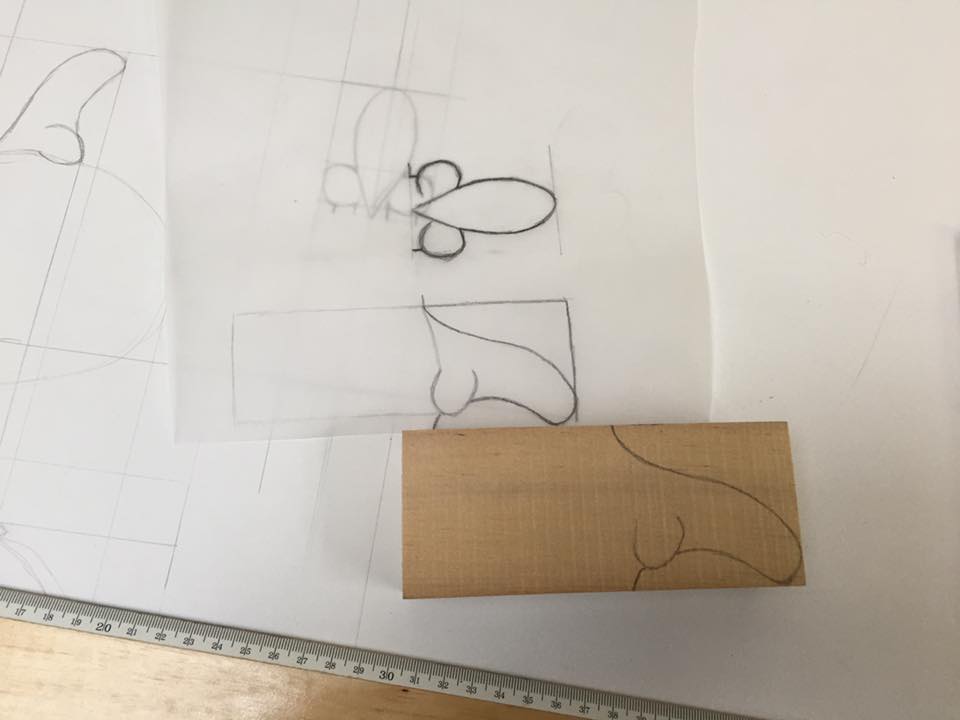 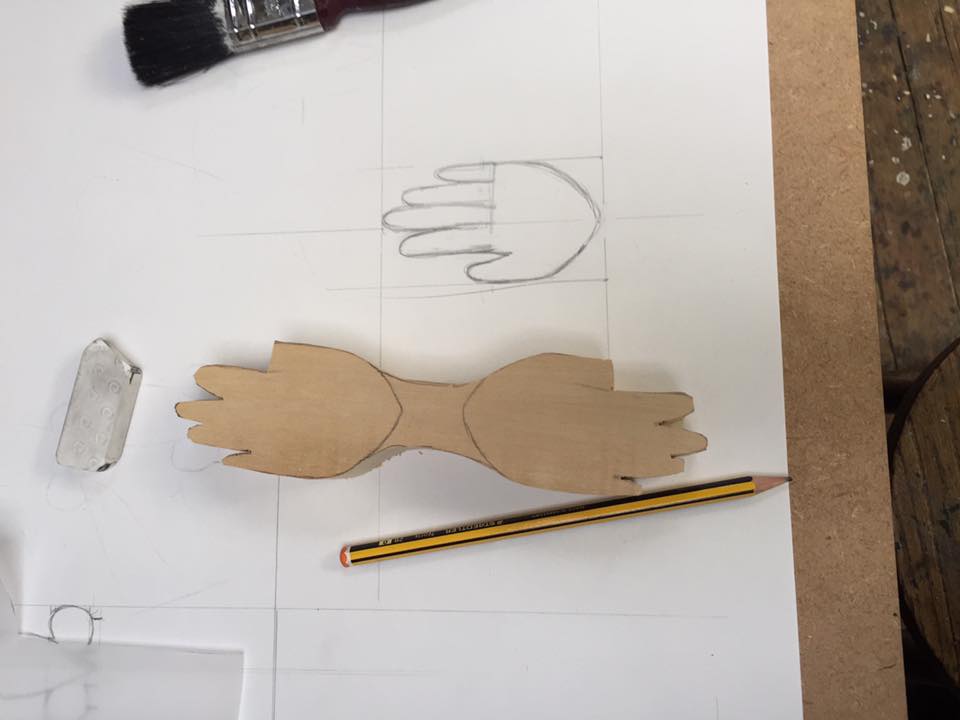