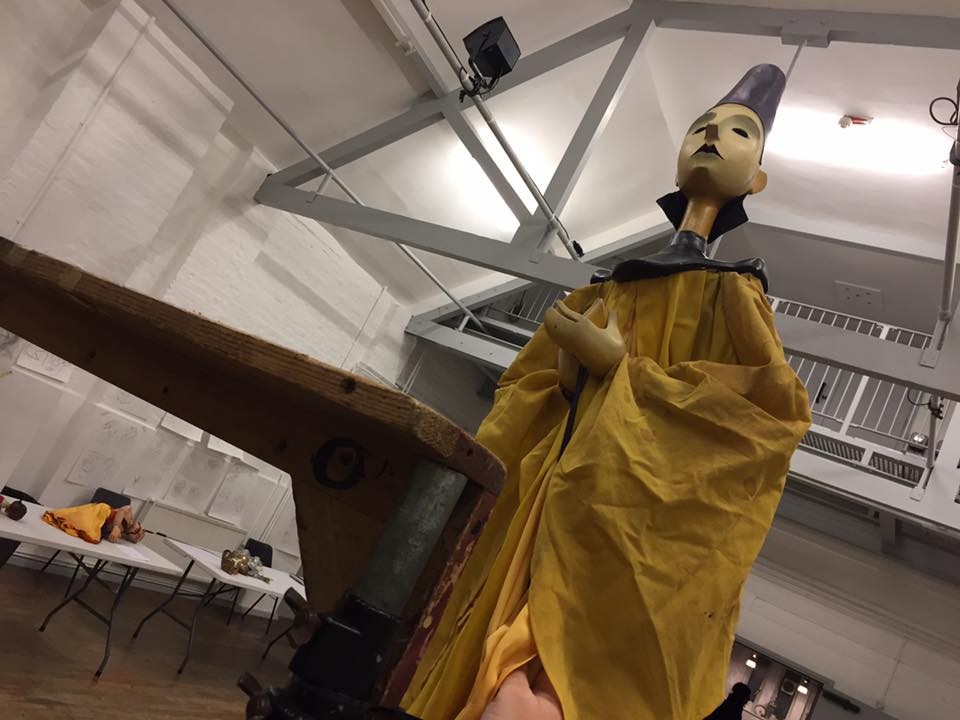 After a lovely movement workshop, We explored the Alexander Technique a little more finding ways to engage our ribs up when breathing allowing our lungs to fill and our ribs work independently, we got into some awkward positions, and explored whether that fullness could be sustained (Useful as a puppeteer with all the contortionist positions we get into). In the afternoon we had a look at rod Puppets with chopstick rods, the puppet is designed to be held up with one hand and then using two sticks on the puppets arms in the other hand to manipulate both arms. We were given a little piece of script to play with, it was a really interesting experience, I’m used to using puppets on table top or life size puppets and being a visible puppeteer, so it was really nice to try a different style of puppetry and experience the distance between you and the puppet and how much you can still convey with essentially being hidden behind set.

Today we explored movement in the puppet to help convey attitude and emotion. We played with a scale of movement (essential focusing on the intensity and speed of movement) and how we read that as an audience and what it tells us about the character. This was a very interesting and difficult day, we were asked to create a short scenario using a puppet and an object, and play with the speed of each movement of the puppet (The scales runs from 1-10, 5 being the mid/standard movement speed or the “Boring speed”). Having to think about every movement and on what scale it should be to help convey an attitude is hard, but so useful and a great tool to have once you have a piece together and want to polish the finer moments. 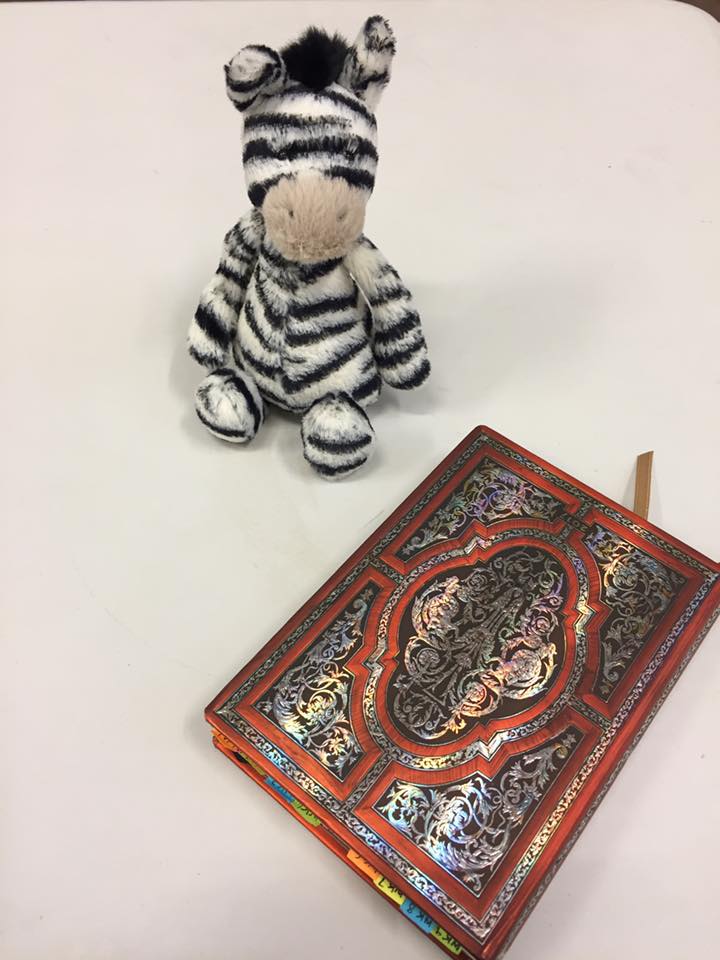 Today focussed on conveying attitudes/emotions through a characters walk. We worked a lot with sticks, first making them walk neutrally and finding a little impulse to make the sticks jump. We were then each given a word (an emotional state or way of being) and had to try and find a walk with our sticks that would clearly represent that feeling; this was Hard! Not only are you trying to specifically show one specific word, but also some words have more than one way of being which can make them tricky. My word was Fanatical, (I was thinking aggressive obsessive) The word wasn’t really clear from the movements of the sticks, but what really helped was having my class mates then use their bodies to show how they would represent it physically. Having a visual to work from was very useful; their interpretation of fanatical was a lot more joyful than I had interpreted from the word, but it really worked to help find the pace and angles of the movement.

Last day of tools from Rene Bakers Signs of Life, we explored impulses, how to make movements appear genuine from the puppet and not forced by the puppeteer. We worked with a bear puppet (two puppeteers) and found ways to make him jump using impulse, the feet lead the jump giving a little up movement (the and…) before pressing down to then jump up. The impulse needs to be clear and the feet have to give a clear cue to the head for the jump to work. Traditionally it’s believed that the head of the puppet leads; In terms of Psychology the Head leads the body (the head sees something and wants to go to it therefore it leads) however in movement terms, the head doesn’t necessarily lead. But the head has to have the Thought and we have to see the thought then the feet can move and we see it as having life. This is really useful to remember to ensure the reality of the puppet and that its movements are believable but are not taking away from its “puppetyness”.

This morning we had a voice workshop; it was lovely to revisit vocal exercises I haven’t done for years, lying on the floor making resonating sounds was glorious. I feel like I’m finding my voice again after having it hidden away for so long which is really nice. We are being encouraged to be free and open with our voice to create well supported and interesting sounds that we never expected. I know this is all going to help me a lot with my confidence as a puppeteer to be the voice of the character, and I’m really looking forward to see how much further I can go with it. 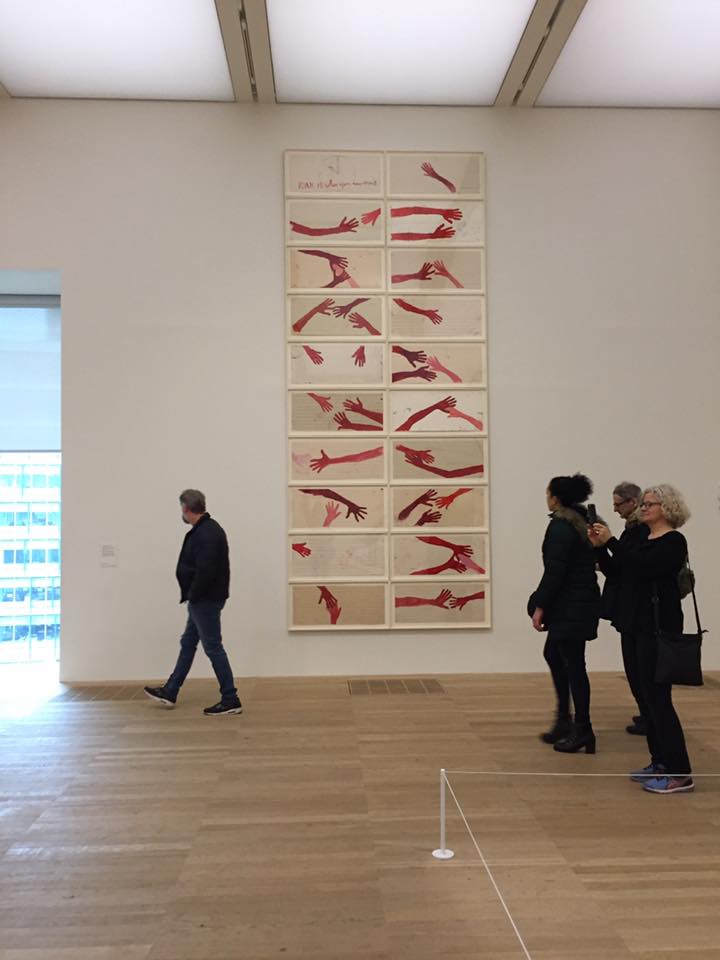 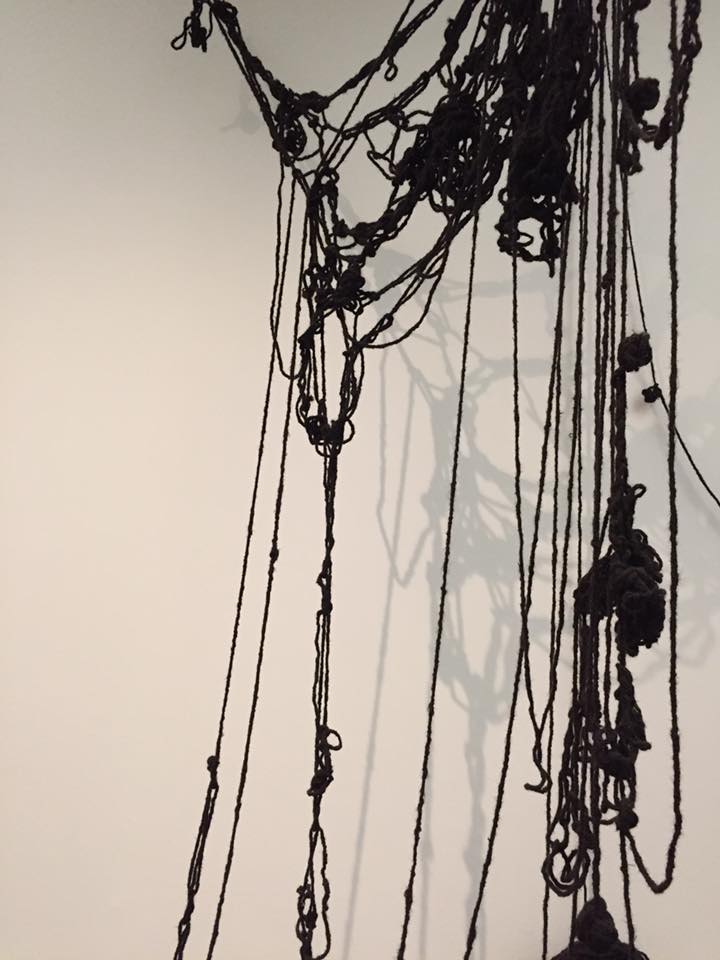 Day 18: Animation Station
Today we had an Animation workshop with Blossom at the Film and Video Workshop near Kentish Town. This was a very inspiring and thoroughly enjoyable day. We were shown how to work a simple animation app on iPad and were set to work creating 3d animations. I am a huge stop-frame animation fan and this was right up my street. We created a simple animation of a character with a ball, but it was so satisfying to watch our wee film come together. I know I’m going to come back to use some of the tricks I learnt today, I can already feel ideas brewing as to how I can use this in performance. This Course just gets more exciting! 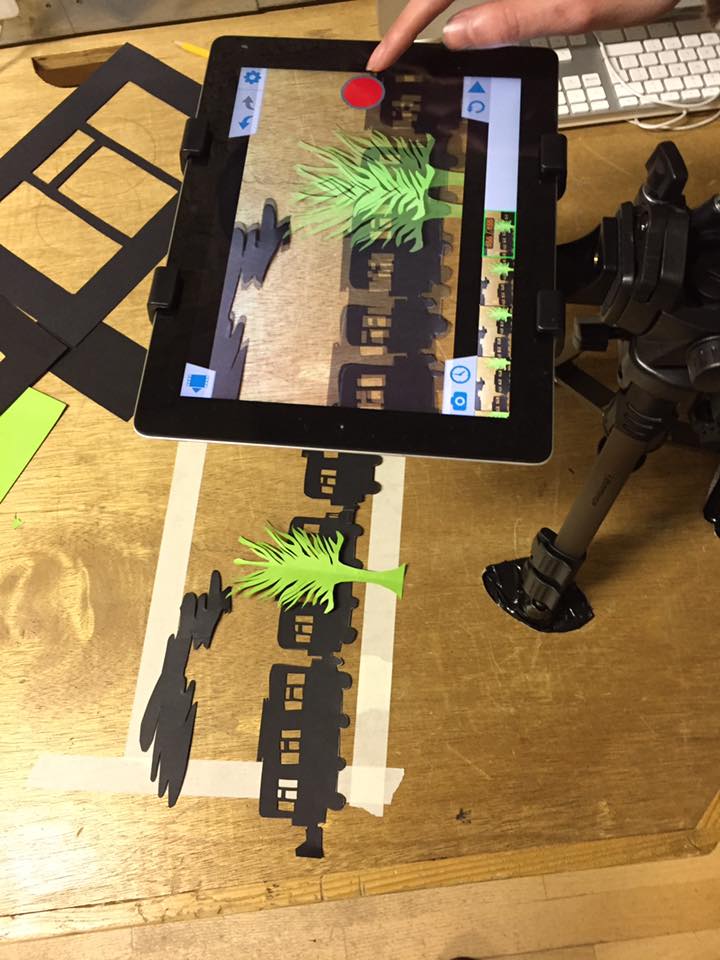 Yes Curious School was Seven days long this week (Kind of), as well as training in puppetry skills and craft, there are also Theatre trips as part of the course. Normally these are in the evenings of school days, but this one show was an exception. I visited the Southbank Royal Festival hall to see a fifteen minute intimate peepshow suitcase puppetry performance with a maximum audience of 1. Being on the other side as an audience member is so important, seeing all different types of theatrical performances helps to shape us as Theatre makers. We discover what we enjoy, the moments that touch us and it helps us to aspire to create moments like that for audiences who come and see our work. I was really reminded of that today.